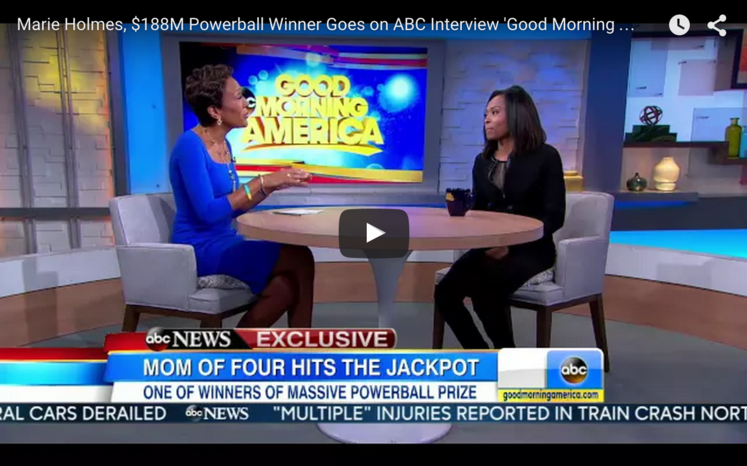 A lot of people know the story of Marie Holmes, the woman who won the $188 million dollar Powerball Jackpot. One of the first “investments” made by Holmes was to bail out her boyfriend Lamarr McDow, who was in prison on $3 million dollars bond on a drug charge.  Lamarr had been incarcerated on heroin distribution charges in a pending court case.

It didn’t take long for Marie’s decision to catch up with her.  Both she and Lamarr were arrested just days later for allegedly violating the terms of Lamarr’s release on bail.  Police claim that the man had violated his curfew a few times since his release, which gave them reason to arrest him.  But money can apparently solve a lot of problems, as the woman reportedly bailed her man out again, this time for $6 million to allow him to be free while awaiting trial on new charges.

Marie defended herself vehemently on Facebook against those who criticized her decision to bail Lamarr out of jail:

“What Y’all need to be worried about is Y’all money and not how I spend mine this is benefitting Y’all how? And no he’s no drug dealer or user but who are Y’all to judge anybody? I will definitely pray for Y’all because it’s much need…they talked about Jesus so I’m not surprised Y’all are talking about me but be blessed though,” she said after bailing out her boyfriend.

You can watch Marie on Good Morning America with Robin Roberts describing how it feels to win the lottery.  Given that her boyfriend was arrested on a weapons charge and for possession of a small amount of marijuana, are the charges warranted?  Could it be possible that she and Lamarr are victims of police harassment?  White people smoke marijuana too, so would they be going back to jail if they weren’t black?