​Tyga, 25, has been dating Kylie Jenner, 18, since the fall of 2014, but kept it somewhat of a secret until March, when he revealed that she had captured his heart. Everyone, especially Tyga, has been waiting for August 10—the day Kylie Jenner finally turns 18 years old. And now, that day has come, and what better way to celebrate it than to give Kylie a brand new $320,000 Ferrari? A fabulous gift from her boyfriend Tyga. But unfortunately, it seems as though that was a bad choice of a gift, as it was reported only a few hours after receiving the Ferrari, she had crashed it already.


Kylie Jenner was allegedly ready to test-drive her new Ferrari for the first time, with none other than Tyga, sitting in the passenger seat. The accident happened after Kylie allegedly floored the gas pedal with an open road ahead of her. There was only one problem—the vehicle was in reverse. Rather than accelerating forward as expected, the brand new Ferrari reversed at about 20 mph before hitting a car parked 30 feet back. Reporters asked Kylie what was going through her mind and she responded: “well, it is a shame because it’s a brand new Lamborghini, but then again I didn’t pay for it, so It doesn’t really hurt that bad”. Well, either Kylie Jenner is tragically retarded or was brain damaged because of the accident, because it was actually a Ferrari she was driving, not a Lamborghini. But anyways, carrying on.


Paramedics and police arrived at the scene a few minutes later to find the Ferrari with a badly smashed rear end. Tyga and Kylie did not suffer any major injuries, only minor cuts and bruises. The Ferrari was then towed away, as Tyga and Kylie were forced to take Uber back home. 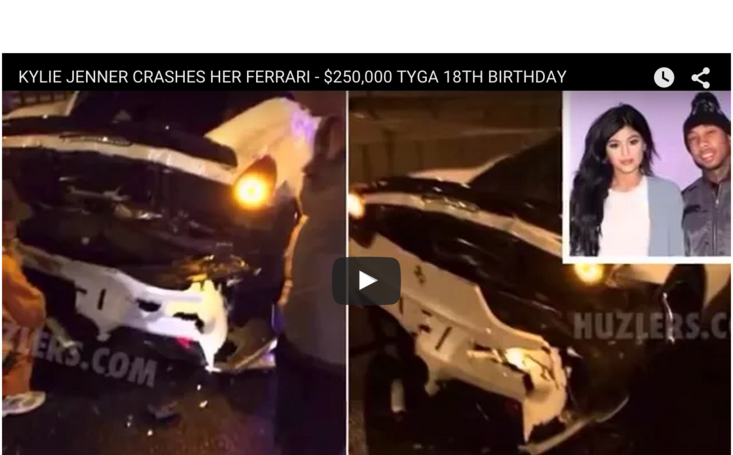